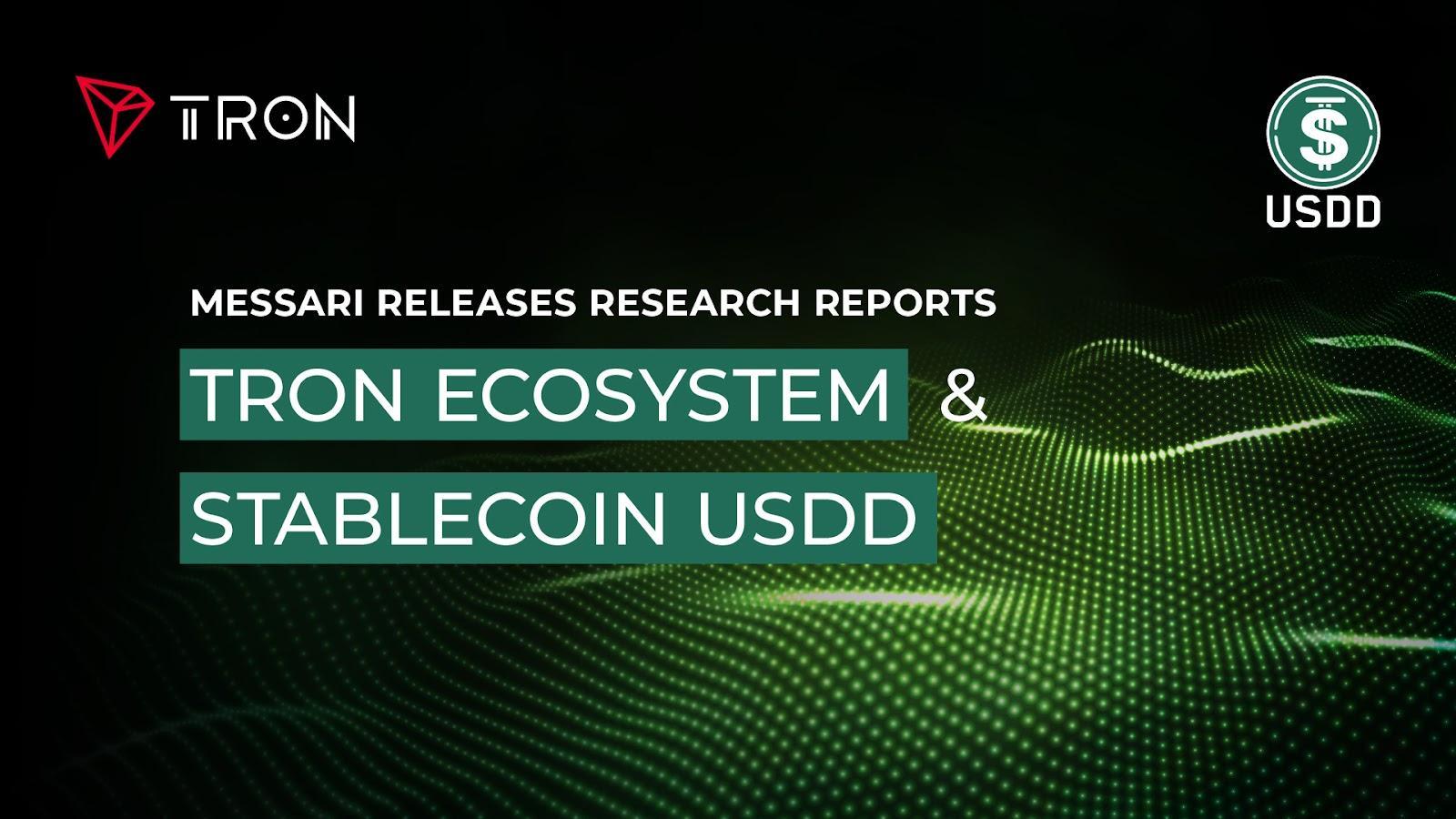 Messari, the leading provider of crypto market intelligence, released two quarterly analysis reports related to the TRON ecosystem – State of TRON Q3 2022 and State of USDD Q3 2022. The two most significant highlights in the comparison of Q3 with Q2 2022 were the 480.4% increase in the number of holders of USDD and the 71% increase in the Total Value Locked of TRX. Both reports indicated positive conclusions about the stability and secure strength of USDD and the TRON network as a whole.

Key insights on the USDD Report include:

It is worth noting that since USDD was launched in May 2022, the supply has grown to over 725 million with almost all of its growth occurring in the first two months. The Messari Report pointed out that there is currently over 36 billion USDT circulating on the TRON blockchain, which they commented “leaves a lot of room for growth for USDD.” The Binance and Ethereum blockchains now also carry USDD. TRON Founder H.E. Justin Sun envisioned USDD offering the opportunity to access currency pegged to the US dollar for anyone and anywhere. Based on the first five months of its existence, that aspiration appears to have a solid start toward becoming reality.

Given that the TRON DAO Reserve has to deposit and stake an equivalent amount of TRX as collateral in order to mint new USDD, the Messari Report also noted that “TRX holders are likely the greatest beneficiaries of USDD adoption, given the potential reduction in circulating supply should adoption grow.” A growing number of partnerships, like TRON becoming the National Blockchain of Dominica and the Huobi Global Advisory Board promising to leverage USDD in pairs with all crypto on their exchange, will likely result in greater user adoption of USDD over the coming years.

The State of TRON Report was also the first edition of quarterly coverage from Messari. This report highlights performance analysis, ecosystem development, and a qualitative analysis. Readers can also get an overview on TRON’s TVL, Strategy and Challenges, and a forecast of the road ahead.

Key insights on the TRON Report include:

The Messari Report offered this complimentary insight in their Ecosystem and Development Overview of TRON:

“The majority of Layer-1 blockchains and their respective ecosystems have experienced declines in the first half of 2022. For most, Total Value Locked (TVL) declined further in Q3 2022, due to a continuation in negative market sentiment and looming regulatory concerns. TRON, however, managed to insulate itself from adverse market conditions by growing its TVL by 61% QoQ.”

Both reports noted the stabilizing effect of USDD’s collateralization, adoption, and future use cases, as well as the remarkable strength of TRON TVL. The TRON DAO community is thrilled with the encouraging conclusions from the Messari research team. 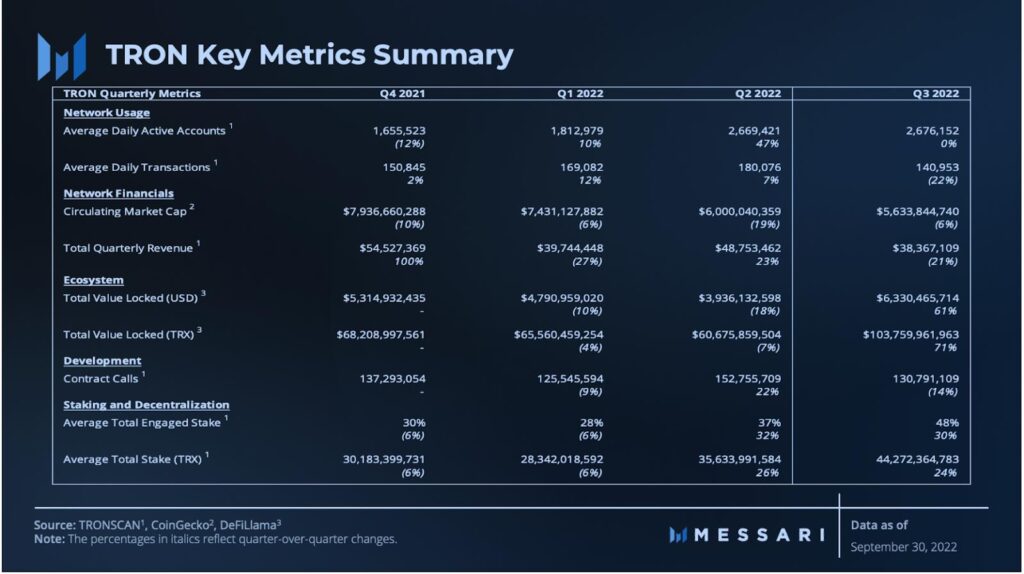 TRON DAO is a community-governed DAO dedicated to accelerating the decentralization of the internet via blockchain technology and dApps.

Founded in September 2017 by H.E. Justin Sun, the TRON network has continued to deliver impressive achievements since MainNet launch in May 2018. July 2018 also marked the ecosystem integration of BitTorrent, a pioneer in decentralized Web3 services boasting over 100 million monthly active users. The TRON network has gained incredible traction in recent years. As of October 2022, it has over 118 million total user accounts on the blockchain, more than 4.1 billion total transactions, and over $11.8 billion in total value locked (TVL), as reported on TRONSCAN. In addition, TRON hosts the largest circulating supply of USD Tether (USDT) stablecoin across the globe, overtaking USDT on Ethereum since April 2021. The TRON network completed full decentralization in December 2021 and is now a community-governed DAO. In May 2022, the over-collateralized decentralized stablecoin USDD was launched on the TRON blockchain, backed by the first-ever crypto reserve for the blockchain industry – TRON DAO Reserve, marking TRON’s official entry into decentralized stablecoins. Most recently in October 2022, TRON was designated as the national blockchain for the Commonwealth of Dominica, which is the first time a major public blockchain partnering with a sovereign nation to develop its national blockchain infrastructure. On top of the government’s endorsement to issue Dominica Coin (“DMC”), a blockchain-based fan token to help promote Dominica’s global fanfare, seven existing TRON-based tokens – TRX, BTT, NFT, JST, USDD, USDT, TUSD, have been granted statutory status as authorized digital currency and medium of exchange in the country.