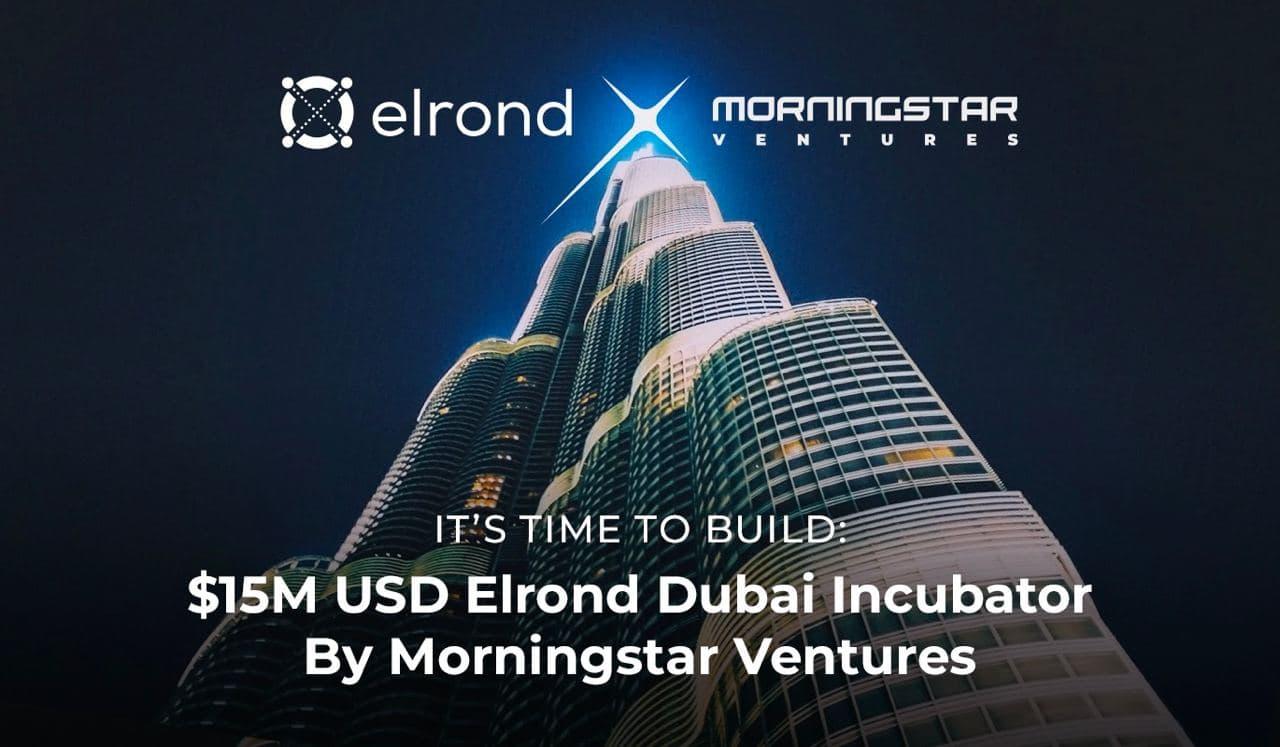 Morningstar Ventures, the dynamic accele rator of ambitious ideas in the blockchain space, has announced a $15 million USD investment fund aimed at projects building with Elrond blockchain technology, as well as a new strategic Elrond Incubator in Dubai.

Morningstar Ventures is a blockchain innovation firm that drives the proliferation of decentralized technologies through strategic placements in startups that it supports with funding, advisory and ecosystem building.

Elrond Network is the internet-scale blockchain that is currently capable of processing 15,000 transactions per second and can scale beyond 100,000 TPS, thanks to its groundbreaking Adaptive State Sharding technology that enables it to scale with demand by adding new shards as needed.

The smart contracts execution platform is carbon-negative by offsetting 25% more CO2 than its network of 3,200 Validators spread all over the world is accountable for. This makes the Elrond Network a truly sustainable, decentralized and highly performant blockchain infrastructure for DeFi, NFTs, IoT and the new internet economy.

“Elrond’s rapidly evolving internet-scale blockchain technology is perhaps the most advanced in the space, which creates an asymmetric opportunity for Elrond to rapidly catch up with – and perhaps even surpass – the biggest blockchain ecosystems.” said Danilo S. Carlucci, Morningstar Ventures Co-Founder and Chief Investment Officer. “We’re thrilled to take this opportunity and build alongside the hardest working team and most engaged community.”

Morningstar Ventures is ready to mobilize significant resources to raise awareness about opportunities in the Elrond ecosystem and will invest $15 million USD into disruptive decentralized projects building with internet-scale technology.

The first project to receive a strategic placement from the Morningstar fund is holoride, the Audi-backed extended reality media platform that seeks to add new dimensions to every car ride through the use of Virtual Reality, in-motion sensors, and haptic feedback devices, with a fair, transparent and sustainable content economy running on the Elrond blockchain.

Morningstar Ventures’s Elrond Dubai incubator will be focused on seizing strategic opportunities for the Elrond ecosystem in the UAE and across the Middle East and North Africa (MENA) region, where blockchain technology sees rapidly growing interest at institutional and government levels.

“The explosive growth of the Elrond ecosystem happened with an unstoppable team building internet-scale technology and an amazing community supporting them. Now, major players such as Morningstar Ventures are making significant long term commitments aimed at the rapid adoption of our tech.” said Beniamin Mincu, Elrond Network CEO. “This signals the start of the next explosive growth phase for the Elrond ecosystem, where driven builders will leverage powerful devkits to  innovate at the forefront of the blockchain Supercycle.”

Extraordinary teams looking to build with Elrond technology, that are at least in an advanced ideation phase, can reach out to Morningstar Ventures to apply for funding and support by sending an email at [email protected]

Elrond is the internet-scale blockchain, designed from scratch to bring a 1000-fold cumulative improvement in throughput and execution speed. To achieve this, Elrond introduces two key innovations: a novel Adaptive State Sharding mechanism, and a Secure Proof of Stake (PoS) algorithm, enabling linear scalability with a fast, efficient, and secure consensus mechanism. Thus, Elrond can process upwards of 15,000 transactions per second (TPS), with 6-second latency, and negligible cost, attempting to become the backbone of a permissionless, borderless, globally accessible internet economy.

To find out more, visit the Elrond website at www.elrond.com

From 12M Street NFTs to 18.5M in Less Than 3 Months – DecentWorld Expands Its…