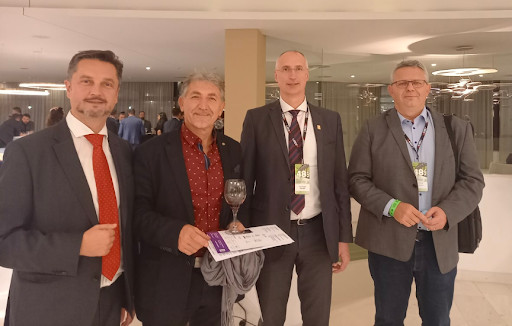 The Blockademia team has attended Linder Media’s “48 hours” annual event, which took place on November 25th at the Park Plaza Histria Hotel in Pula, and had the opportunity to meet entrepreneurs and politicians.

After Blockademia’s project presentation, the meeting successfully led to a close connection with the mayor of Split, Dr. Ivica Puljak, and Dr. Ernest Vlačić, Professor at University of Zagreb who showed interest in the applications and promise of blockchain technology for anti-fraud systems, spearheaded by Blockademia.

Blockademia’s platform has originally been created to facilitate universities and educational institutions at issuing official certificates and degrees but, given Blockademia’s significant utility and reliability, the program has attracted the attention of private and public institutions too and now counts numerous private and business subscribers.

The mayor of Split, Croatia, Dr. Ivica Puljak, has also agreed on how Blockademia’s system adoption would simplify and secure the supply of legal registration documents like property ownership certificates, birth certificates, death certificates, contracts and also public documents like city-owned companies and administrative reports. Conversations about deeper integrations in local systems are ongoing, which could make it the first time that blockchain technology is used in government bureaucracy.

Blockademia’s decentralized platform ensures the transparency of the document issuing process thanks to a constantly updated Proof-of-Truth consensus mechanism, making it ideal to guarantee simple online access to documents for citizens, and eliminate any possibility of falsification.

Users only need to upload the document, while the system will record a unique hash into the blockchain, which is going to be transferred as metadata. Users, or those intended to visualize the document, will then be able to access the certificate with a QR code. Simple, secure and unbreakable.

“Blockademia aims to eliminate any kind of document fraud,” says Goran Težak, President of Blockademia. “Thanks to its decentralized consensus mechanism, blockchain offers the most efficient technology to uniquely identify files. Having the opportunity to discuss a topic such as public documents safety with Croatian mayors and businessmen was incredibly exciting and sets the stage for changing bureaucracy as we know it.”