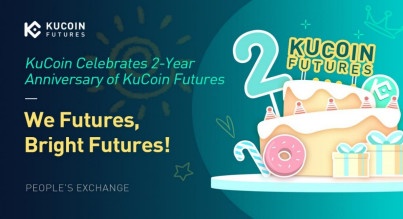 KuCoin, a global leading crypto exchange  welcomes two-year anniversary of their Futures service. The service keeps growing  fast thanks to outstanding support from KuCoin users. KuCoin Futures was launched  in August 2019 and ushers in its second anniversary. Since the initial launch, the  platform has become one of the top 10 global Futures trading platforms on the  market today.

The team fondly remembers the day when they introduced the first Bitcoin Perpetual  contract. Today, that investment mechanism spans over 60 different  cryptocurrencies on KuCoin. The number of contract users increased by 260% and  the open interests (OI) increased by 15 times compared to last year.

“The user interface and experience of KuCoin Futures have improved dramatically  over the years. Initially, it was only accessible through a web portal, but it has  become a full-fledged web and mobile app experience,” said Johnny Lyu, CEO of  KuCoin, “In addition, many cryptocurrency enthusiasts rely on their smartphones for

After the initial success of the Bitcoin perpetual contract, the KuCoin Futures  platform began introducing support for more currencies and services. The first step  was Delivery contracts to create an example for the broader crypto futures trading  industry. Then, after enabling more support for hedging and arbitrage, the team  introduced numerous mainstream and promising cryptocurrency contracts to  promote exposure diversification.

With support for 13 languages and the LITE version to help novices get acquainted  with Futures Trading, KuCoin continues to raise the bar. Last year, the team  introduced the KuCoin Futures Brawl, gamifying the concept of crypto futures  trading. Over 200,000 users partook in this event and confirmed it was a fun  experience.

The future outlook for KuCoin Futures includes further upgrades for leverage and  initial margin ratios of certain contracts. Additionally, users can expect more  innovative products and features, including the KCS contract launch in Q4 2021.  Cross-collaterals are another important feature coming later this year, paving the  way for KuCoin Futures trading system 2.0, slated for a 2022 release.

To celebrate the two-year anniversary of the KuCoin Futures launch, the team began an anniversary carnival on August 18, 2021. During the event, a total of $1 million  USDT in bonuses will be awarded to users. That giveaway follows on the heels of  the warm-up $100,000 bonus giveaway, awarding users with trial funds and  deduction coupons based on their historical futures trading volume.

Launched in September 2017, KuCoin is a global cryptocurrency exchange for over  400 digital assets. It currently provides Spot trading, Margin trading, P2P fiat trading,  Futures trading, Staking, and Lending to its 8 million users in 207 countries and  regions around the world. In 2018, KuCoin secured $20 million in Round A funding  from IDG Capital and Matrix Partners. According to CoinMarketCap, KuCoin is  currently the fifth biggest crypto exchange. In 2021, Forbes named KuCoin as one of  the Best Crypto Exchanges of 2021. For more information, visit https://kucoin.com

Facebook is preparing to launch its Novi wallet into the market