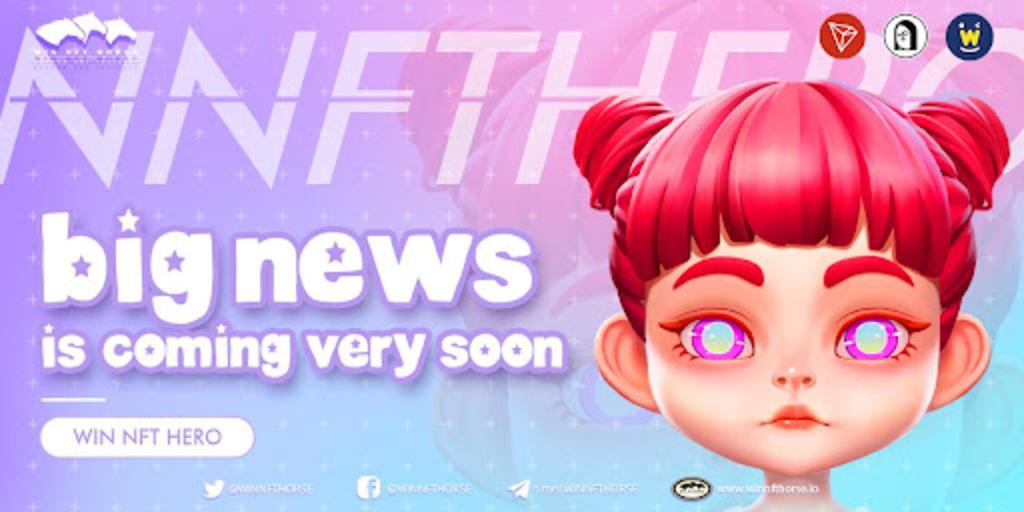 This new addition arrives in the wake of WIN NFT HORSE, TRON’s first GameFi product revealed in November 2021, in an effort to expand its blockchain-based gaming ecosystem.

WIN NFT HERO is a 3D cartoon-style turn-based strategy game with next-generation features. Players may exchange a variety of heroes and equipment on the market to acquire strong spells and skills, which they can then use to win rewards in combat.

WIN NFT HERO has several gaming modes, including the multiple-level PvE, PvP one-on-one ladder tournament, PvP multiplayer arena, adventure, etc. Players may construct their own NFT hero by matching and combining what’s available in the game with a content-rich development module. The closed beta of WIN NFT HERO will begin on April 30.

TRON’s GameFi products are thriving. With the WIN NFT HERO debut on the horizon, WIN NFT HORSE Season 2 has already begun. This second season brings social networking elements to the game, enabling guilds to own their lands, mining assets, etc.

WIN NFT HORSE recently introduced HOS, the only in-game asset utilized to upgrade or recast racehorses. The game applies HOS in various ways, such as playing roulette. There were concerns about HOS being merely random game points that have no significant in-game value after release. However, it’s worth pointing out that all HOS holders, or players who have staked a specific amount of HOS, are eligible for beta tests and the chance to be whitelisted for NFT items in all future games, including WIN NFT HERO and others in development. In addition, HOS offers its users early-bird discounts on various activities.

As joint products of TRON, APENFT, and WINKLink, the growing  WIN NFT HORSE and the upcoming WIN NFT HERO are GameFi initiatives that are leading the way to diversify the TRON gaming ecosystem in the metaverse.

TRON is dedicated to accelerating the decentralization of the internet via blockchain technology and decentralized applications (dApps). Founded in September 2017 by H.E. Justin Sun, the TRON network has continued to deliver impressive achievements since MainNet launch in May 2018. July 2018 also marked the ecosystem integration of BitTorrent, a pioneer in decentralized Web3 services boasting over 100 million monthly active users. The TRON network has gained incredible traction in recent years. As of April 2022, it has over 89 million total user accounts on the blockchain, more than 3.1 billion total transactions, and over $8 billion in total value locked (TVL). In addition, TRON hosts the largest circulating supply of USD Tether stablecoin across the globe, overtaking USDT on Ethereum since April 2021. The TRON network completed full decentralization in December 2021 and is now a community-governed DAO.

WIN NFT HERO is a “GameFi + NFT” 3D cartoon-style turn-based strategy game launching soon. WIN NFT HERO is designed to allow the exchange of various heroes and equipment on the market to acquire strong spells and skills, which players can then use to win battle rewards.

TUSD-am3CRV Pool Launches on Curve (Polygon) with the Gauge Feature

Cardano has increased the block size by 10% to 88KB